Directions to our church.

The St. Vivian family continues its commitment to this gospel message by:

– Celebrating the Word and sharing the Eucharist in our Worship
– Teaching as Jesus taught, through scripture and example
– Proclaiming the Gospel through service to others
– Using our diversity to build and strengthen our community

Who was St. Vivian? 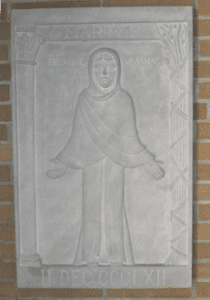 The life of St. Vivian, as written in the 16th century, says she was a Roman girl, the daughter of dedicated Christian parents, who were both persecuted for their faith. After her mother was beheaded and her father sent into exile because of their love for Christ, Vivian was placed under the guardianship of Rufina, a non-Christian woman. In spite of her pagan influence, Vivian remained true to the Faith. In 326 AD, Julian the Apostate had her tied to a pillar and beaten with a whip; the beating resulted in her death.

St. Vivian is buried in what is now the church of St. Bibianae located in Rome, which was built and dedicated by Pope Paul Simplicus in the fifth century and restored by Gian Lorenzo Bernini in 1625. Her feast is celebrated December 2nd.

© 2022 St. Vivian Catholic Church
Made with ♥ by Diocesan